**This post contains affiliate links to products I use and recommend. I may recieve a small commission, at no cost to you, if you make a purchase through a link.**

Last week I had a meltdown of sorts. It was Sunday and my husband was at work. On Sundays I clean house and do laundry in preparation for the start of the school week. My boys, Wyatt age 6 and Mason age 4 1/2, share a bedroom and for over a week it had been a mess of toys. I decided that while I was busy cleaning they needed to clean up their room too. I understand that they are just kids but their room gets so messy at times I can barely open the door or venture through to help them find their clothes for school. My thought is that if they are capable of making the mess then they are capable of picking it up. I have tried to teach them to pick up one mess or one toy before pulling out another but they still haven’t grasped that idea. I sent them into clean their room around noon and I helped them out by picking up a few bigger things. In order to make the task seem a bit easier I give them a certain item to clean up – when they are done they come tell me and I go find another group of toys for them to clean. For instance I tell Mason to clean up the shoes and pile the dirty clothes and Wyatt to clean up Mr. Potato Head pieces. 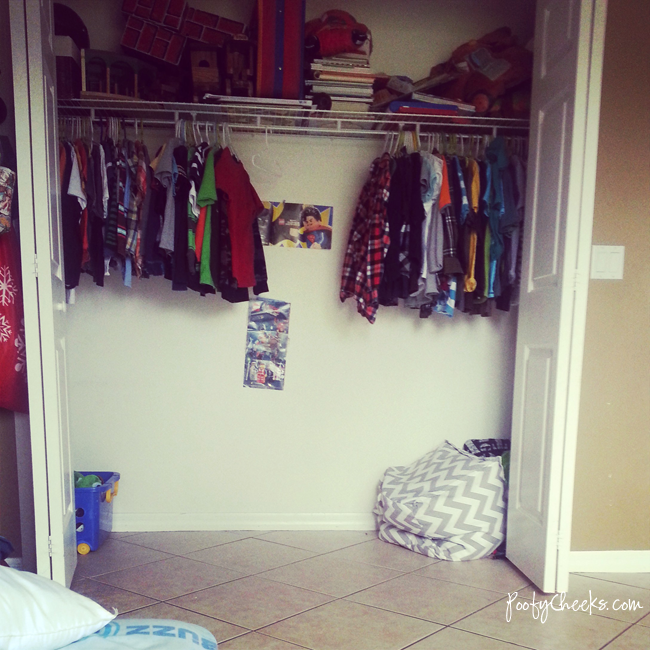 Well last week they didn’t want to clean up ANYTHING. After I had helped them and given them a task I went back to cleaning throughout the rest of the house. One hour had passed and they hadn’t come back out to find me for their next task so I checked on them. I am not even sure how it was possible but the mess had grown. I gave them a lecture on picking up and told them I would be back in 15 minutes and they needed to have their first task done or they would be staying in their room until the room was done. 15 minutes later – nothing! I went out and made their lunch and served it to them in their room reminding them they would eat dinner in there too if they couldn’t clean. As the afternoon went on I checked on them periodically but nothing I seemed to do or say made them want to clean. (I will even admit that at one point I lost my mom cool and yelled – I shut the door and felt a bit bad but I felt as though nothing I was doing made a difference to them.) My husband came home for lunch between 2 and 3 and he tried to light a fire under their butts too. As an attempt to get them to do something I made the threat that any toys that weren’t picked up by the end of the day were going to go in the trash. By 6 o’clock when my husband got home from his day at work the boys still sat in a messy room that looked no different (well actually yes, it looked worse) than when I sent them into clean it before lunchtime. 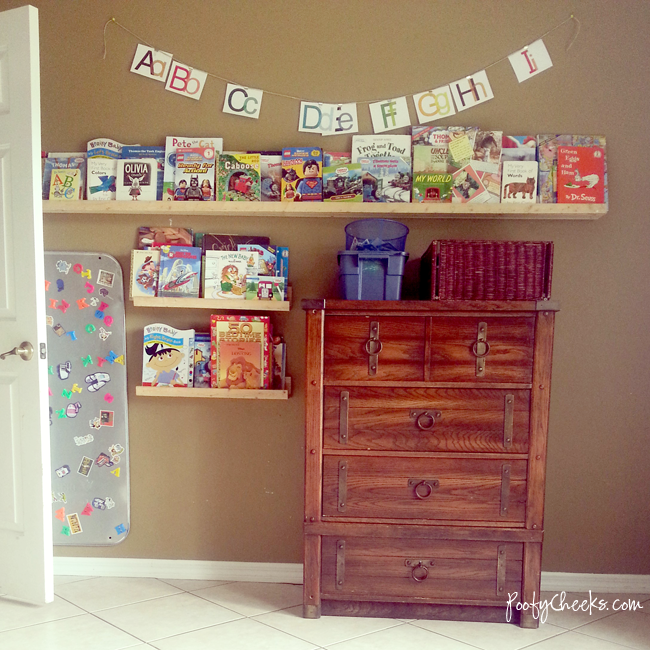 That night they came out to eat dinner and as we sat at the dinner table my husband and I told them they didn’t have to go back in and clean because they proved they didn’t deserve their toys anymore. I explained that while they were at school the next day I would be packing them up and taking them to other kids or to the trash. By the end of dinner one boy was crying and the other was mad. Even though I had made the empty threat of throwing their toys out before – this time was different – all I could think about was that here I am pregnant with baby #4 and I can’t have my kids thinking it is okay to make messes and not clean up after themselves. I have to run a tight ship or otherwise the ship will sink with me as the captain. The next day I cleaned out EVERY SINGLE TOY from their room and put it all in the garage to sort through. I left them with only the things in the above pictures. They got to keep their books, crayons, coloring books and a few play pretend items. Throughout the first few days I pulled out a rhyming dominos game and flash cards. They have proven that even with those few items they can create a mess but every afternoon they have to pick them up. When I have sent them in to clean up they haven’t given me any problems – they have cleaned up the mess without complaint. I won’t say the transition has been easy – we are still transitioning 8 days later. The day after their toys were taken away my husband went to pick my 4 1/2 year old up from pre-kindergarten and came home to tell me that Mason had misbehaved at school. This came as a shock because he had NEVER misbehaved at school before – at least not to the point where the teachers felt the need to pull us aside and tell us about his behavior. There was a new boy in his class and Mason was mean to him and also cut his own shirt on purpose while they were using scissors in class. When I asked Mason about his behavior he told me the other boy interrupted him while he was talking. The next day when I went to pick Mason up I was greeted in the hallway by Mason’s teacher. She asked me if I knew why Mason might all of a sudden have had a shift in behavior because he had hit the new little boy in class. I was blown away! I explained that we had taken away all of the boys’ toys and video game privileges and that Mason had also fought coming to school that morning because his brother had a fever and had stayed home sick from school. When I got home my husband, Mason and I all talked about his behavior and explained that he would not be allowed to have any toys back until he had good behavior and we would not tolerate him being mean to other kids in his class. Since that day he has returned to his normal behavior and when I picked him up this morning his teacher said he has had a 360 since last week with great behavior yesterday and today. 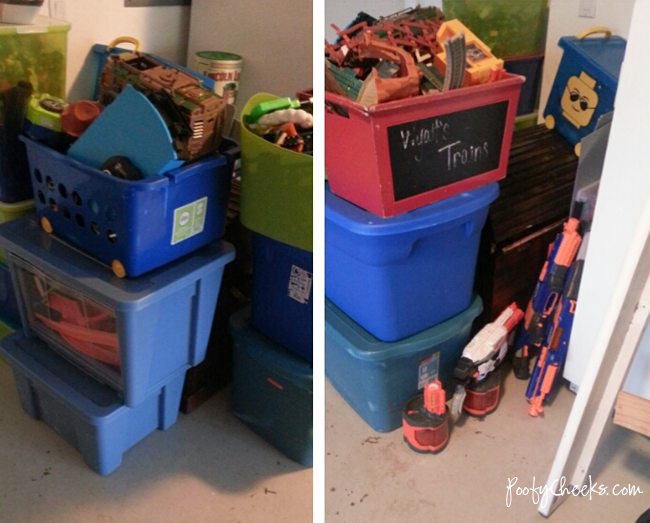 **Picture above shows their toys piled in the garage. What you can’t see very well are four other bins stacked in one corner and three bins stacked in the other corner plus the big wooden toy box in the middle filled with toys! I will admit that last week after the second day of hearing about Mason’s behavior at school I questioned if my choice to take away all of the toys was the right one. I was afraid maybe my drastic measure was too much but over this past weekend and the last few days my husband and I have noticed a clear change in both of the boys. They are asking to play outside more and the other day they came up with the idea to play ‘Book Fair’ in their room. Taking away their toys has forced them to use their imagination and come up with ways to entertain themselves which is something that makes me beyond happy! We have noticed a shift in their behavior towards one another and over the weekend we started rewarding good behavior and finishing chores with 30 minutes of video games each day.  Right now their toys are all still out in the garage and this week I am going to be sorting through and donating or storing quite a bit of them in the attic. My goal is to consolidate the toys we keep into a few bins that we will rotate every few weeks. I don’t want to put so much back into their room that it gives them the chance to make a mess like the ones we used to have! After making my decision to take away the toys I posted it on my personal facebook page and lots of moms commented or messaged me saying I was doing the right thing. My friend Skye told me about a post from Living Well Spending Less and after reading it I felt confident in my decision. My parents and my husband’s parents both called telling us not to toss certain toys out. Neither my husband or I have intentions of throwing out toys the kids have received as gifts, especially their Legos, but we can’t handle all the little tchotchkes and toys which never get played with but are are tossed out of toy boxes in order to get to the ‘one’ toy they were searching for. As I packed up all the toys and had them sitting in my living room before taking them to the garage I made my husband look at all the bins. I must say we are partially to blame. We should never have let our kids have so many toys – no two kids should have as many toys in one room as our kids did. Here we are trying to give our kids things we didn’t have or be the parents of the year by buying them that ONE toy they really want. What we actually did was create monsters who think they should get a toy each time we go to the store and have such excess they can’t even clean up on their own messes.