Things have been hectic around here and I am trying to get back in the swing of things. Last Monday I noticed that our 3 year old and five month old were both coughing and very congested. Since I was supposed to fly out to Utah for a blog conference I called the pediatricians office on Tuesday to get them both in before I left. I knew that it was going to be hard enough on my husband and family caring for healthy kids let alone sick ones. 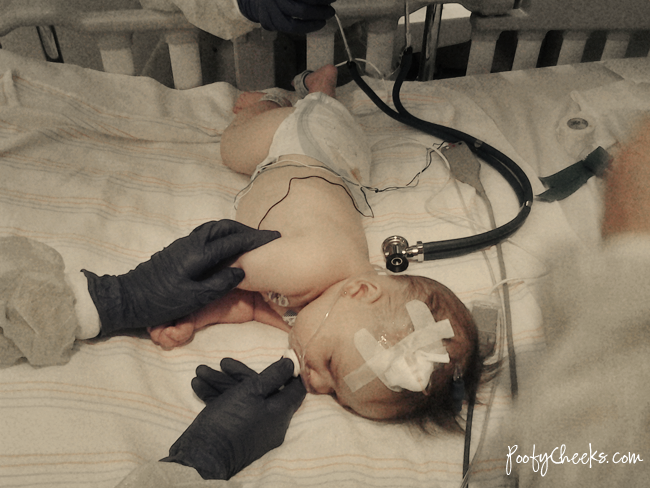 While we were at the pediatricians office the nurse noticed that our five month old daughter was having trouble breathing so she called the doctor to come in right away. They started a nebulizer treatment on her and told me that they were calling an ambulance to transport her to the hospital. I was in shock. Here I thought I was just bringing her in for a visit and the doctor is calling to have her taken to the hospital! Then the doctor quickly looked at Mason and told me he had a double ear infection. The town we live in has a small hospital without a pediatric ward, but we had to go there first. The EMS guys said they couldn’t pass a hospital to go to one further away. While we were there the emergency room doctor ordered tests so we could try to find out what was wrong with her. She had a chest xray and was tested for RSV. While we were waiting for test results Delilah stopped breathing. She turned red and then blue right there in my arms. I laid her down on the bed and we called out into the hall for help. Thankfully my mom, who is an RN, was there too because the nurses and doctors at our local hospital are not used to dealing with babies. They rolled her onto her side and rubbed her and she started breathing again. It was less than a minute but time felt like it was in slow motion. A few minutes later the nurse came back in and told us Delilah tested positive for RSV which is a respiratory virus. Maybe it was the fact that I knew they didn’t have a pediatric ward or that I just felt more confident in the staff at the next hospital, but after Delilah stopped breathing we pushed the doctor to transfer her. We were approved for the transfer but the accepting doctor at the next hospital wanted an IV started and blood cultures done on her first. After three nurses, four IV attempts and three blown veins we had them call to see if they would accept her without the IV or blood cultures. The nurses weren’t equipped with small enough gauged needles to start an IV and they didn’t have the experience. Thankfully they let her come without it. 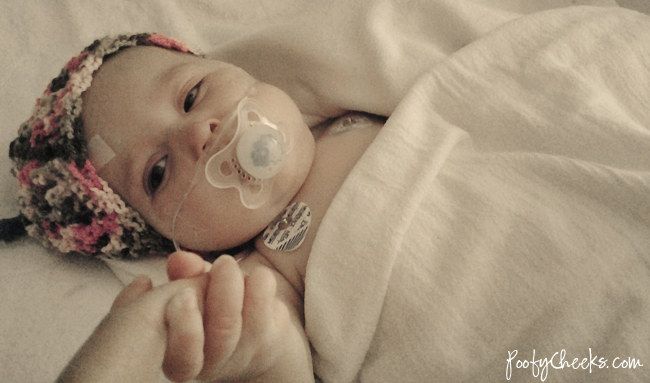 Once we got to the next hospital we were taken up to the pediatric ward and into a room where she was put in isolation. We were put in a room with a sign and whenever the nurses, doctors or anybody else came in they had to put on gowns, gloves and masks so they wouldn’t pass her virus to any other patients. The first order of business was to get her IV started, but again these nurses had trouble too. As soon as they would think they had it the IV wouldn’t flush the saline and they would end up blowing the vein making it unusable. Finally after sticking her in her arms, hands, and feet (over a dozen times all together) they started the IV in her head. The first picture in this post was taken just a few minutes after they finally started the IV. My poor little girl was pitiful. She could barely cry or eat, was having trouble breathing even on oxygen, and looking at her broke my heart. As soon as I got a chance I sent my SNAP roomies a quick email to tell them I wasn’t going to make it. There was no way I was going to leave my little girl to fly halfway across the country.

The hospital only allowed one parent to stay the night, so I stayed with her for the next four nights while my husband took care of our boys. His parents also helped out over the weekend while he worked. Since I thought I was leaving to go out of town early Wednesday morning, I already had the boys’ bags packed and our in-laws lined up to watch the boys. We are so blessed to have the help and support that we received from our family and friends. Each text, call, visit and email was a reminder of the many people we had thinking of and praying for us. It was amazing. 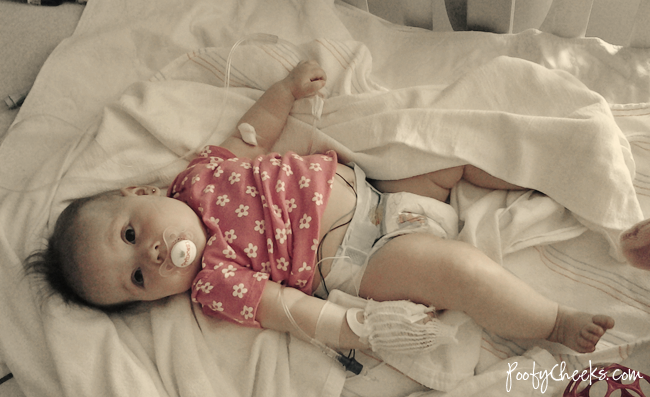 We were discharged Saturday afternoon. I left my little girls side for a total of 2.5 hours during the five days we spent in the hospital and I wouldn’t have it any other way. There were nebulizer treatments every six hours, antibiotics twice a day, beeping machines and it quickly became our routine. Each day I saw as she improved. Finally after a week of fighting the virus I finally got a quick smile from my normally happy baby. There were a lot of tears from both of us, constant bonding time as we rocked or she held onto my finger from her hospital crib, and our nurses and doctors were great. 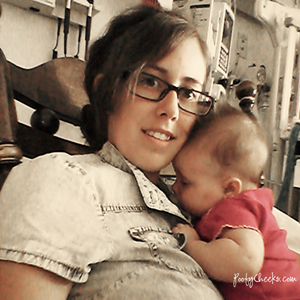 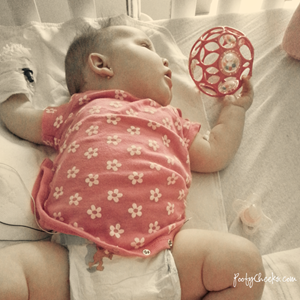 We are doing nebulizer treatments every 6-8 hours at home and although she has been more fussy than normal she is smiling and gabbing away. As I write this I am reminded that we are so lucky that Delilah had such a quick recovery because some friends of ours have a baby who is fighting a lot harder right now. Please pray for baby Tristan who is 10 months old. He has Hypo Plastic Left Heart Syndrome and received a heart transplant at 3 1/2 months but a few days ago he started rejecting his new heart.

Thank God your little girl is well now, I can't imagine how scary that must have been for you. My prayers are with you and Delilah, and your entire family. Stay strong!!

Good thing you brought the kids in! How wonderful that she is on her way to recovery.

Good thing you brought the kids in! How wonderful that she is on her way to recovery.

I'm so glad that she's doing better! Sorry that you didn't get to come to Snap; I'd love to get together sometime so we can meet in person. :)

Kelsey, I'm so glad she's ok. I seriously started tearing up reading this because I can't imagine how traumatic that had to be last week. I'm glad she's doing better and while we missed you last week, you were where you had to be. You're an amazing mommy and I'm glad you guys are doing better now. My son had RSV and it's no joke and no fun. HUGS!